I wonder if this guy got any… 🙂

Ever wondered what happens if you shut off a 500kV switch? No? Well it’s interesting anyway…

A 3 foot tall, 37 pound lady gave birth to a 3 pound healthy baby boy yesterday. Dude, the lady gets around in a wheelchair because her body is “distorted” (that’s a quote from the article, I’m not being insensitive)… so what I’m wondering is how her and her husband (who is a giant at 5′ 8″) did the dirty deed???

I hope my interior decorator doesn’t start recommending these lamps made out of doll heads… Sure they are cheap ($35), but I’m not so sure it’s worth it…

Some first grader was suspended from school for 3 days for sexual harassment. hahaha!!! The beginnings of a true pimp. 🙂

There have been similar cases. In 1996, a New York second-grader was suspended for kissing a girl and ripping a button off her skirt — an idea the boy said he got from his favorite book “Corduroy,” about a bear with a missing button. Earlier that year, a Lexington, North Carolina, 6-year-old was separated from his class after kissing a classmate on the cheek.

Here’s one I got this morning…

can you help me to find my coponents and open them to my desktop pc. If youcan wouldyou help meto reprogram my computer and download the correct information i need to do different tasks.

Sure, I’ll get right on that.

I get so many random emails where people think I’m support or sales for whatever company they are trying to reach. So I decided I’ll start posting the emails in their entirety starting now (I’m not going to go digging for old ones).

Did you try contacting the printer manufacturer by chance? Or maybe someone who knows who in the hell you are?

Here’s an utterly useless fact for you…

What are those blue reflectors in the street for? They mark where fire hydrants are. They will be offset to the side of the street where the hydrant is.

Aren’t you glad you know that now?

Uhm… I thought maybe it was an isolated incident, but apparently more than one person thinks this is the cool thing to do.

I saw a commercial for some drug to help combat “restless leg syndrome” where you have a tingling feeling in your legs, and you have the urge to move/shift your legs. Is this a real thing?

Why do I feel like maybe a drug manufacturer made up this “disease”?

Maybe if your body is telling you to move your legs, you should move your legs, rather than take a drug to suppress the urge… But hey, what do I know? I’m not a doctor. 🙂

It seems like there are so many commercials for drugs these days. Most to help combat stuff you didn’t even know you had. Maybe we should leave prescriptions to doctors, rather than people going to the doctor to tell them what you need to take. eh? Time to invest in the stock market! 🙂

The National Football League playoffs produced a Super Bowl matchup that suggests a winning year for stocks is now a lock.

When the Pittsburgh Steelers upset the Denver Broncos Sunday, it meant that neither team in the Feb. 5 game will have American Football League roots. The Steelers, which moved to the American Football Conference when the NFL and AFL merged in 1970, will face the Seattle Seahawks in this year’s championship game.

I get very few phone calls on my cell phone… maybe 3 calls per week or so. Anyway… sitting in the car with my roommate, I started singing my ringtone (which I don’t do normally). And 10 seconds later my cell phone started ringing. My roommate had a pretty weird look on her face. 🙂

Teach ’em young! 🙂 At this rate smokers might die of lung cancer before they are legally allowed to buy cigarettes.

I can just see this kid on Santa’s lap… “I’ve been a good boy, I would like a carton of Marlboro Reds please.”

Someone pointed out to me that the day after my NY Times article came out, someone went and registered shawnhogan.com.

I hope they put it to good use and start the official fan club. hahahaha 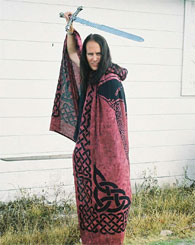 Wait, what? I don’t even know what to say about this one, but Jonathon “The Impaler” Sharkey is running for Governor of Minnesota in 2006.

The picture I have was taken from his campaign website. hahaha…

Honesty is very seldom heard nowadays, especially from a politician. So, I am going to break from political tradition. My name is Jonathon â€œThe Impalerâ€ Sharkey, Ph.D., L.D.D.D. I am a Satanic Dark Priest, Sanguinarian Vampyre and a Hecate Witch. My Magikal Path name is: Lord Ares.

I despise and hate the Christian God the Father. He is my enemy.

Well… isn’t that neat… 🙂 Maybe this guy can make sure that whoever stole my snowboard stuff (see previous entry) really does burn in hell.

I kind of want this guy to win, because it will be years of good material for Conan, Jon Stewart, Saturday Night live, etc. 🙂

What’s the deal with Chuck Norris lately? I seem to run across his name everywhere these days…

After that, no matter what anyone says about me… I’m normal.

David Letterman successfully had the restraining order against him overturned.

“I appealed to the court for a restraining order to keep this man away from me, but now that’s been denied me,” she said. “He has access to me. He can actually come for me or send people. He has many accomplices. I know this sounds crazy. I was crazy to have listened to him in the beginning.”

Well… at least she KNOWS she sounds crazy. 🙂

While playing a game of “Keep Away” with a cell phone, a woman decided to swallow the phone. Gee, what an incredibly good idea!

The woman was taken to the emergency room at St. Mary’s Hospital in Blue Springs. She still had the telephone in her throat upon arrival at the hospital, Decker said.

Colleen Nestler of Santa Fe, New Mexico was actually granted a restraining order against David Letterman because she says he used code words on Late Night to show he wanted to marry her and train her as his co-host. According to the documents, Letterman has forced her to go bankrupt and caused her mental cruelty and sleep deprivation since May 1994.

She wrote that she began sending Letterman “thoughts of love” after his “Late Show” began in 1993, and that he responded in code words and gestures, asking her to come East. She said he asked her to be his wife during a televised “teaser” for his show by saying, “Marry me, Oprah.” Her letter said Oprah was the first of many code names for her and that the coded vocabulary increased and changed with time.

Nestler requested that Letterman, who tapes his show in New York, stay at least 3 yards away and not “think of me, and release me from his mental harassment and hammering.”

I have one word for that lady – Hahahahahahahaahahaha!

It’s pretty funny to see the propaganda that the United States drops on countries we invade. In 1983, we rescued Grenada from “rape and slavery”. 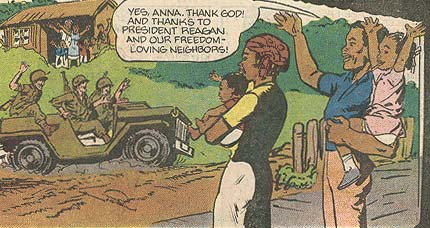 This is issue #1 for the comic book (I wonder how many issues came out? hehe).

Not exactly the proper treadmill technique (I’m assuming anyway). “Are jeans and a jacket the proper running attire?”

Man, I could watch this over and over for hours and keep laughing I think. What the hell is the blonde chick doing? 🙂

P.S. – Does anyone know how to convert an animated GIF to a Quicktime movie (still need it)?

I’ve been having bizarre dreams about people that I know who they are, but never met before. Last night I somehow got caught in the middle of Paris Hilton and some of her friends robbing a department store. Long story short is somehow I got sucked into being their getaway driver.

The night before I had a dream where I was at some SES show (which I’ve never actually been to one) and was talking to Matt Cutts and realized he was building a house directly next to mine and was somehow trying to convince me to install a backup data center for Google in my server room in the basement of the house. So I asked him, “Why don’t you put it in your house? You work for them.” and he replies, “Well electricity is expensive and you are going to have solar panels, so it would be free for you.”

If nothing else, Matt can unquestionably say that people dream about him now. 🙂

So apparently two readers of my blog got the same idea after reading this entry. How awesome would it be to get brass knuckle implants? And they are cheaper than breast implants, so it’s even better! Judging from some of their life decisions, these are obviously good women that would make good mommies. What to get your gang-banging girl in your life for Christmas? Rhinestone brass knuckles of course. Leaves a pretty impression in someone’s forehead. I could care less about Apple’s retail strategy, but what I want to know is what kind of glass cube is worth $9 million dollars? And more importantly, what kind of retail space is worth $1,000 per square foot in RENT???

Uhm… some lady is making houses out of the contents of a vacuum dust bag… and it’s “art”. Uhm, how about no? Gross. (link)

A wax museum in Moscow, Russia is currently running an exhibition that highlights dangers of drug use.

This is what happens if you sniff glue, so don’t do it. 🙂 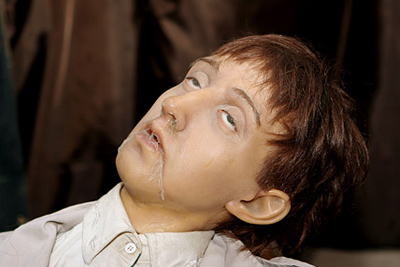 Drug addicts commonly get gangrene apparently… haha It seems that drug addicts also have crappy shoes. He probably got gangrene from walking around in sandals during a Russian winter.

You can find other disturbing funny images over here.

Would be ideal if the video quality was better, but it’s still cool… 🙂

I saw this on TV last night (I wish I had the video for this, but I can’t find it anywhere yet). This is what Joaquin Phoenix had to say to a reporter while doing an interview for his new movie I Walk The Line…

“Do I have a large frog in my hair? … Something’s crawling out of my scalp.” Despite reassurances from the reporter, the actor replied, “No, but I feel it. I’m not worried about the looks. I’m worried about the sensation of my brain being eaten… What did you ask me?”

It was pretty funny seeing it live. Hopefully the video will turn up online soon.

This is interesting… this appears to be the first “wrongful life” suit… A disabled girl (blind and deaf) is suing her mom’s doctor for letting her be born into a “lifetime of suffering”.

You want to know why my stock market prediction is going to come true? Because I’m psychic… all I have to do is think about getting more Xserves, and this morning someone from Apple’s enterprise business unit called me asking if I would be interested in any Xserves if they would give me a discount (they never have called me before).