…so as I’m going through the {cough, cough} 2+ years of comments I never got around to moderating on this blog, I came across one that is freaking me out.

Dr. Finch seems to think I have some gnarley spider bite that needs immediate doctor attention and my life is in danger.

I think he missed this part about this post… lol

Thank God is all I have to say… if it were otherwise, I might be the first person to die from not moderating their blog comments fast enough.

Digital Camera magazine has some really cool photos people took of animals for their photographer of the year contest… the top 3 were these:

You can find more over here:

The dolphins at an aquarium in Fushun, Liaoning Province, had fallen sick after swallowing the plastic from the edge of their pool, and attempts to use surgical instruments to remove the plastic failed because of the contraction of the dolphins’ stomachs in response to the instruments, the China Daily newspaper reported.

Veterinarians than decided to ask for help from Bao Xishun, a 2.36-metre-tall herdsman from Inner Mongolia.

Bao, 54, was confirmed last year by the Guinness Book of World Records as the world’s tallest living man.

The official Xinhua news agency said Bao, using his arm length of 1.06 metres, was able to reach deep enough into the dolphins to pull out the plastic.

Photographs showed the jaws of one of the dolphins being held back by towels so Bao could reach inside the animal without being bitten.

“However, the dolphins will be able to digest these and are expected to recover soon.”

There appears to be an alien in the camera dome at the construction site. Great… now I need to go there, climb up there, clean it out and hopefully not get some alien egg implanted in my chest.

Is it me, or do you think there might be a worldwide stingray terrorist campaign going on?

A leaping stingray stabbed an 81-year-old Florida boater in the chest, authorities said Wednesday, leaving its poisonous stinger lodged close to his heart in an incident recalling the one that killed Australian TV naturalist Steve Irwin last month.

Fire Department officials in Lighthouse Point, about 30 miles north of Miami, said James Bertakis was in a small recreational boat with two grandchildren Tuesday when the spotted eagle ray leaped aboard and struck him.

“For an 81-year-old man he’s in really good shape,” Sullivan added, saying Bertakis was expected to make a full recovery after surgery at a local hospital to have the stinger removed from his chest.

“Crocodile Hunter” Irwin, 44, died when a stingray’s stinger punctured his heart off Australia’s north coast last month. It was one of only a handful of stingray fatalities on record.

Did anyone besides me know that it doesn’t get light outside until about 7:15 am?

We went on a half day fishing boat today, and I had to get up at 5:00 am (yuck!!). Our boat went down to Mexican waters almost to Rosarito. Because of that, we had some Mexican beer at 8:30 am (Corona). We almost convinced Shoemoney to hug/spoon a sea lion for $200. haha That would have been a great picture, unfortunately it would also mean that we would be making the arrangements for his funeral… and that’s no fun.

Oh, and I caught 6 fish because I’m pretty much a bad ass fisherman.

It would be perfect if you could somehow mount this cat on top of an ambulance and he could be its siren. Would work better than a normal siren.

One Steve (Foley) was shot by a off-duty police officer, while another Steve (Irwin) was killed by a stingray today (well yesterday now).

The San Diego Chargers’ Steve Foley was shot Sunday by an off-duty policeman who had followed him to his home after noticing Foley’s car driving erratically, a sheriff’s investigator in San Diego, California, said.

Steve Irwin, the Australian TV presenter known as the “Crocodile Hunter,” has died after being stung in a marine accident off Australia’s north coast.

Australian media reports say Irwin was diving in waters off Port Douglas, north of Cairns, when the incident happened on Monday morning.

Irwin, 44 was killed by a stingray barb that went through his chest, according to Cairns police sources. Irwin was filming an underwater documentary at the time.

Queensland Police Services also confirmed Irwin’s death and said his family had been notified. Irwin was director of the Australian Zoo in Queensland.

He is survived by his American-born wife Terri and their two children, Bindi Sue, born 1998, and Robert (Bob), born December 2003.

Crazy that the Crocodile Hunter was finally killed (and not by a crocodile)… That dude would jump into a murky swamp in the middle of the night to wrestle a 16′ crocodile, and a little stingray does him in. Weird.

Can I take a nap please? Thanks…

We are staying in Manuel Antonio (at the Costa Verde hotel) for 2 nights (last night was our first night), and we woke up, and check out what was outside our hotel window (this a picture from our room)… A three-toed sloth. Cool. 🙂

BTW, my head still has a knot in it.

Somewhere between David Hasslehoff’s favorite cafe and Manuel Antonio, we came across a bridge that had all sorts of crocodiles under it. Thankfully, there was a little shop that sold ice cream Trits (BTW, these things are f’ing good), so we could eat them while we stare at the crocodiles.

On the first (real) day of our Costa Rica trip, we stopped at a cafe on the way to Manuel Antonio… and guess who was here? None other than David Hasselhoff himself!

I’m going to Montana in 2 weeks for a little mini-weekend vacation, and someone mentioned to me that I should get some “bear spray” if I’m going to be hiking around. So I Google [bear spray] just to see what it is (not that I really was going to get any).

So the one testimonial they have on their front page is from some guy named Mark, and this is his picture they use:

Uhm yeah… if that’s what I’m going to look like after using their product, maybe I just won’t use their product and just skip the hiking part altogether I’m thinking. 🙂

Does this seem like a pretty big catfish to anyone besides me? Something like 650 lbs (I forget exactly now)…

One of Wiggly‘s friends was over the other night, and this is what he was doing… weird. 🙂

I really don’t know why I find this 3 second video so funny, but I do, so here you go. 🙂

My cat (Wiggly) is always falling off stuff (monitors, computers, shelves, etc.) because he falls asleep and then just falls off stuff. This certainly isn’t the funniest one I’ve seen of him falling off stuff, but it’s the only one I managed to get on film.

Supposedly this is some new Bigfoot footage that someone shot in Minnesota, but it just looks like a drunk guy in an ape suit to me…

Here’s something else I saw last summer at a friend’s house and just ran across it again on the Internet tonight… Tyson the skateboarding dog. 🙂

DARPA seeks innovative proposals to develop technology to create insect-cyborgs, possibly enabled by intimately integrating microsystems within insects, during their early stages of metamorphoses. The healing processes from one metamorphic stage to the next stage are expected to yield more reliable bio-electromechanical interface to insects, as compared to adhesively bonded systems to adult insects. Once these platforms are integrated, various microsystem payloads can be mounted on the platforms with the goal of controlling insect locomotion, sense local environment, and scavenge power. Multidisciplinary teams of engineers, physicists, and biologists are expected to work together to develop new technologies utilizing insect biology, while developing foundations for the new field of insect cyborg engineering. The HI-MEMS may also serve as vehicles to conduct research to answer basic questions in biology.

Uhm… I thought maybe it was an isolated incident, but apparently more than one person thinks this is the cool thing to do.

Last time I was deep sea fishing, I swear I caught one of these, but threw it back because it seemed a little small. God dammit… if only I knew it was fully grown!

The tiny, see-through Paedocypris fish have the appearance of larvae and have a reduced head skeleton, which leaves the brain unprotected by bone.

They live in dark tea-coloured waters with an acidity of pH3, which is at least 100 times more acidic than rainwater.

Be sure to strap in your dog when doing parabolic maneuvers in a plane for weightlessness. 🙂

Not to be outdone by his brother Wiggly, Yashi decided he wanted International fame… Today Yashi is in the New York Times business section (online and print edition). 🙂

I look kind of funny, but it’s because I was trying to keep from laughing while I’m pretending to actually do something on the computer. 🙂 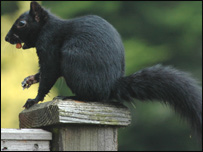 A “big” stray dog started barking at the squirrels so they attacked and killed the dog. Then ran off with pieces of its flesh. 🙂 The lesson? Don’t mess with squirrels.

Check it out over here.

My cat is apparently living a double life… I never realized how many friends he had until I checked some logs (these pages have his picture):

Judging from those profiles, Wiggly has some weird friends. 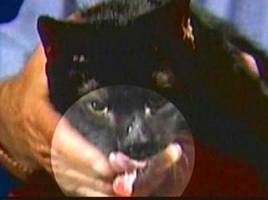 I don’t know about you, but I’m pretty sure that if my cat had two tongues, it would kind of freak me out. I think maybe this cat got some lizard DNA in him or something.

Just looking that that picture almost makes me want to cry. 🙂

Thankfully, my cats are not a spawn of satan and only have one tongue. Although Yashi (my white cat) who has an oral fixation and will lick anything for hours might actually be jealous.

Not sure what to say about this, but here’s the ad:

WELL THE PARENTS OF STEVIE HAVE DONE IT AGAIN!

These little babies are true miracles of nature. They have the same parents as Stevie our no eyed mascot. They are truly unique in every way. They are smart and adapt quickly. They aren’t shy either, when they hear your voice they become excited just like any seeing turtle does. The one thing they need help with until they are use to their surroundings is feeding and as smart as these little fellows are it won’t take long for them to get adapted to your feeding schedule. So if you have the time and love for a special needs turtle, order one of these little gems today and enjoy them for a lifetime.

I wonder what day this guy woke up and thought that this might be a good idea?